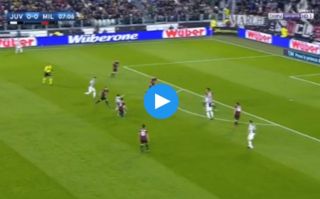 Juventus forward Paulo Dybala may have added a couple of millions to his price tag with this sublime effort in the match against AC Milan this weekend.

The Turin giants ran out 3-1 winners in this crucial Serie A clash, and Dybala somewhat stole the show with this stunning opening goal from long range.

The Argentina international is showing himself to be one of Europe’s top attacking players at the moment, and it’s little surprise so many big clubs have been linked with him in potential big-money transfer moves in recent times.

TMW recently claimed United scouted Dybala as he netted his side’s winner against Tottenham in their recent Champions League win at Wembley, while the Daily Mail have recently claimed Juve would ask for around £105million to let him go this summer.

It’s easy to see from strikes like this why United might want the 24-year-old in the Premier League, as his rocket of a left foot proved too much for Milan goalkeeper Gianluigi Donnarumma.

Leonardo Bonucci later equalised against his old club before two more goals from Juan Cuadrado and Sami Khedira won it for Massimiliano Allegri’s side.