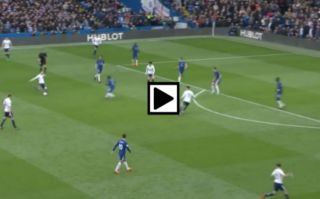 Spurs star Christian Eriksen scored an absolute thunderbolt against Chelsea this afternoon to draw the north London side on level terms against the Blues in the Premier League at Stamford Bridge.

The Danish international fired home an almost unstoppable shot from the edge of the box past Argentine Willy Caballero in the Chelsea goal to make the scores 1-1 going into half time.

Spanish international Alvaro Morata had put the Blues one goal to the good earlier in the half, however Eriksen’s thunderbolt saw the two rivals go into the break all square in a match that both are desperate to win in order to boos their chances of finishing in the top four come the end of the season.

Here’s a clip of the midfielder absolute peach of a strike against Antonio Conte’s side this afternoon. Should Caballero have done better with the attempt? Is this the best goal you’ve seen so far this season? Let us know below.

What a goal from Christian Eriksen! pic.twitter.com/VTJkReVGHl

‘Would be an amazing addition’ – Arsenal legend would be happy to see Christian Eriksen back in north London December 28, 2020 18:57
Arsenal FC