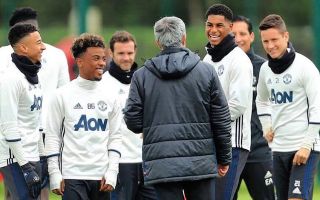 A Manchester United star has posted a video to Instagram which shows him making a child cry after an outrageous nutmeg.

Manchester United wonderkid Angel Gomes has posted a video to social media in which he makes a young child cry after nutmegging him.

The video was posted to Gomes’ personal Instagram story and the talented United starlet showed absolutely no mercy as he ruined a young child’s footballing career before it had even started.

Gomes has earned the plaudits of many in recent months after impressing at United youth levels and has even featured for the Red Devils in multiple competitions as a substitution.

The youngster is just 17-years-old and has arguably one of the brightest futures in football ahead of him having already been capped at a number of England youth levels, including the U16s, U17s and U18s.

The ruthlessness shown by the youngster is likely to appeal to the cold-hearted Jose Mourinho, although we’re not sure if Premier League defenders will concede defeat alike to the young child in his Instagram video after a nutmeg. (Imagine Ryan Shawcross’s reaction if Gomes pulls off a similar skill in a Premier League clash.)

However, the video is largely light-hearted and United fans understandably will be excited to see any footage of such a young talent (regardless if it is in a back-garden). Watch the brutal video below.