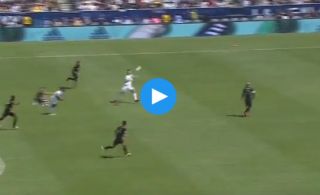 Zlatan Ibrahimovic didn’t waste any time conquering the MLS as he scored an absolute wonder-goal on his debut for new club LA Galaxy yesterday.

The veteran Swede just left Manchester United to make the move to US soccer and it’s fair to say the American commentators probably haven’t ever seen anything quite like this guy.

Subbed on in the 71st minute, Ibrahimovic found his side 3-1 down to LAFC, but managed to fire in a stunning equaliser just six minutes after his grand entrance.

With the ball dropping for him well outside the box, Ibrahimovic lashed in the kind of volley that only he can – making a long-distance speculative effort look routine as he has done with so many of the best goals scored over the course of his career.

Still, at the age of 36 and following a lengthy spell out injured, many will no doubt have wondered if the player’s days of pulling off incredible things like this were over.

Clearly not. Welcome to Zlatan, LA.