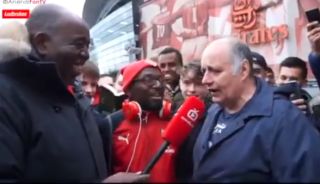 Arsenal Fan TV regular Claude was absolutely fuming with Pierre-Emerick Aubameyang for giving up his penalty to Alexandre Lacazette against Stoke City.

While many Gooners have hailed the Gabon international’s unselfish play to allow Lacazette a chance to end his goal drought, Claude was livid as it meant he lost a potentially lucrative bet.

WATCH: Video: Arsenal fan explains how Aubameyang might have saved Gunners’ Europa League campaign without even playing in it

The outspoken Arsenal fan slammed Aubameyang’s decision as ‘a f**cking joke’ as he’d put a fiver on an Aubameyang hat-trick at 25/1.

The former Borussia Dortmund striker scored his first from the penalty spot and then added a superb second from open play before the Gunners were awarded a second spot-kick late on.

But Aubameyang gave the ball to his strike partner Lacazette, who made no mistake to score just his second goal of 2018 after a tough time in north London.

Everyone was in a good mood then @GoonerClaude turned up fuming with Aubameyang for letting Lacazette take the penalty because it cost him his bet ????

This could be crucial as the France international is likely to start against CSKA Moscow in the Europa League this week due to Aubameyang being cup-tied in the competition.

Claude, however, is fuming about the players’ antics meaning he missed out on a very decent amount of money.

Typical Arsenal fans – never happy, even when they win!