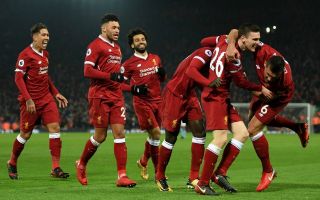 Liverpool left-back Andrew Robertson has been named by ex-Red and pundit Jamie Redknapp as the bargain of the season after his superb rise at Anfield.

The Scotland international was one of the most low-key arrivals at a big six club of the whole summer, but has become a key part of how Jurgen Klopp’s side play in the second half of the season.

Liverpool completed some fine business last summer with relatively low-cost signings such as Mohamed Salah and Alex Oxlade-Chamberlain as well, but Redknapp has hailed Robertson as the best find.

BBC Sport had the 24-year-old’s fee as an initial £8million, potentially rising to £10m, which certainly seems like a rarity for almost any signing for an established European side these days.

Still, Robertson had to overcome a difficult start as he found himself behind Alberto Moreno in the pecking order, and has now worked his way up to becoming clear first choice for Klopp in a side that look genuine contenders to win the Champions League this season.

Andrew Robertson has been a revelation for Liverpool

‘Left back is one of the more difficult positions to fill,’ Redknapp wrote in the Daily Mail.

‘He was relegated with Hull last season, and that can leave a mental scar, but he has thrived at a big club. Defensively tough, Robertson is also dangerous going forwards and he made Liverpool’s winning goal at Palace.

‘When you think Manchester City spent £133million on full backs last summer, at £8m Robertson is the bargain of the season.’