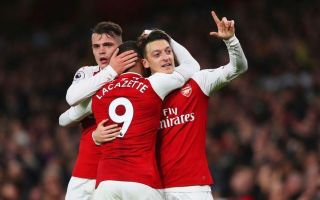 Arsenal secured a 3-0 win over Stoke City at the Emirates on Sunday, and Mesut Ozil seemingly didn’t forget a tweet from Stoke Police earlier this season.

A brace from Pierre-Emerick Aubameyang and an Alexandre Lacazette penalty sealed all three points for the Gunners, as they eventually found a breakthrough in the second half and made it comfortable.

With that in mind, it would appear that Ozil was biding his time to hit back at Stoke Police, following their jibe last year following a win for the Potters at the start of the season, as seen in the tweet below.

After being mocked over a ‘robbery’ by one Arsenal fan, they responded by suggesting that they were busy looking for a ‘missing person, surname Ozil’ after the 29-year-old had a poor game.

Sticking up for that Arsenal fan, the German playmaker hit back with a dig of his own on Sunday, and naturally it delighted the Gunners faithful as the tweet went viral.

Arsene Wenger will be delighted to have secured three points, ensuring that the international break didn’t knock their momentum. With the Europa League now their primary objective to get back into the Champions League next season, Ozil will be hoping to send out plenty more positive and jovial tweets in the coming weeks and continue to lift the spirits of the fans in what has been another difficult campaign.

.@Policingstoke didn‘t help in the case of robbery last summer so we took matters into our own hands. ???? Proud to announce we earned three hard fought points today for @TheIwobiEffect and all the other gunners ? #Banter pic.twitter.com/wVrFgPKeJh