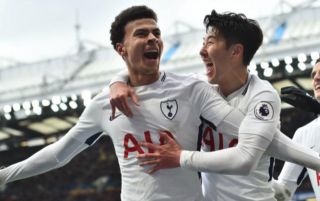 Tottenham star Dele Alli took to Twitter to troll Chelsea fans and indeed all of his critics after he played a starring role in Spurs’ weekend victory at Stamford Bridge.

The England international scored twice for Mauricio Pochettino’s side as they claimed a 3-1 win away to Chelsea – the first time they’d done so in the 21st century and their first for a whopping 28 years in total.

Alli went into the game with a great deal of pressure on him as many questioned his contribution this season after what has admittedly been something of a dip in form.

Still, the 21-year-old is still at the early stage of his career and is undoubtedly one of the most impressive young players in Europe after making himself one of the main men for club and country since stepping up from League One to the Premier League in 2015.

Responding to those who doubted him and to Chelsea fans taunting him at Stamford Bridge, Alli posted a picture on his Twitter page of him celebrating one of his goals with a series of emojis.

The zip-lipped face seems to suggest he’s telling Blues supporters to ‘zip it’ after all the abuse that had come his way before he ended up deciding the game.

Not a bad comeback, Dele. Now England fans will just hope he’s coming into form at the just the right time ahead of this summer’s World Cup.