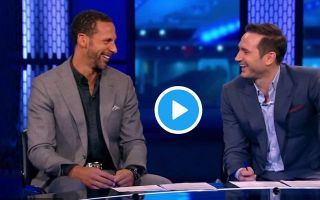 It was a bad weekend for Chelsea given their defeat to Tottenham, but Frank Lampard was keen to remind everyone just how long their rivals and been waiting for a win at Stamford Bridge.

Goals from Christian Eriksen and Dele Alli (2), secured all three points for Spurs as they hit back after Alvaro Morata’s opener.

SEE MORE: Chelsea warned over the one big risk of sacking Antonio Conte

It ended a staggering 28-year wait for them to secure a win away at Chelsea, and so naturally they would have been delighted to end that hoodoo.

From a Chelsea perspective, it would have been difficult to get over the disappointment, but particularly given it was a major setback in their hopes of qualifying for the Champions League, it was a massive blow for Antonio Conte, the players and supporters as a whole.

They’ll now have to wipe out an eight-point gap in just seven games before the season ends, and so while all that is quite negative, Lampard was keen to give all a reason to smile.

BT Sport host Gary Lineker and pundit Rio Ferdinand were deep in conversation when the previous Chelsea unbeaten run came up. As Lineker switched over to get Lampard’s opinion on the matter, the former Chelsea star couldn’t help himself but remind everyone just how long Tottenham had been waiting.

Naturally, Chelsea fans loved it, as seen in the responses below.

Super frank having our back all day everyday

Love this man. Would never roll over like the current crop.