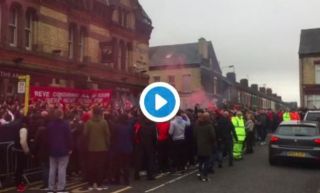 They say there’s something special about European nights at Anfield, and it’s hard to argue when you see the kind of excitement these matches build around the area.

Some fans are already uploading footage of themselves gathering ahead of the big game as Liverpool hope to produce a memorable night against Pep Guardiola’s all-conquering City side.

The Reds may even be slight favourites at least for this first leg encounter after their superb recent performances, with Mohamed Salah in particularly inspired form up front.

Liverpool are also the only team to beat City in the Premier League this season as they won an epic encounter 4-3 at Anfield earlier in 2018.

What more could Jurgen Klopp and his players ask for to fire them up than scenes like this, as gathered together by Liverpool fan blog Empire of the Kop…

The atmosphere is building quite nicely. #LFC pic.twitter.com/ZQvGD7gjOu