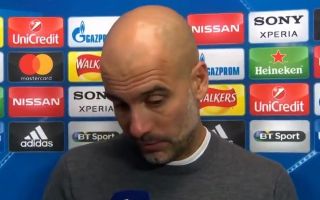 Manchester City manager Pep Guardiola made a pretty bold claim after he saw his side humbled 3-0 by Liverpool in the Champions League tonight.

Speaking after the game, the Spanish tactician was defiant in insisting his side were still in the tie, despite being fairly comfortably beaten by Liverpool in the end.

While 3-0 is not an impossible scoreline to come back from, it will certainly take some doing based on City’s performance tonight, when they failed to even register a shot on target in 90 minutes.

Liverpool will also have the edge in that they didn’t let in any away goals but can score a few of their own when the two teams meet again at the Etihad Stadium next week.

Still, Guardiola isn’t giving up and while he admitted it would be hard, he sent the message to his players that they can still go through if they get their performance right in the second leg.

“Can you still save this?” – @DesKellyBTS

“Of course. Now nobody believes we can achieve it, but we’ll try!”

All eyes on next Tuesday at the Etihad ? pic.twitter.com/XHlpqHyERo

When asked if City could still save this game, Guardiola told BT Sport: ‘Of course. Now nobody believes we can achieve (reaching) the semi-finals and of course it will be tough, but we’re going to try.’