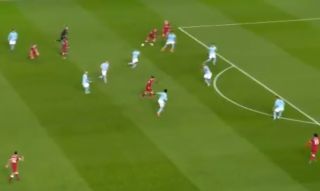 Liverpool have raced into a 2-0 lead against Manchester City in the Champions League this evening, with Alex Oxlade-Chamberlain scoring an absolute screamer.

The Reds have been superb so far, with Mohamed Salah making it 1-0 early on after the visitors were caught on the break, and now the Ox has doubled the home team’s lead.

Liverpool are known for being something of a force in these European nights, with the Anfield atmosphere often too much for even the most talented of opponents.

Manchester City have been hugely dominant in the Premier League this season and will be seen by many as among the favourites for the Champions League trophy as well this season, but they’ve got an absolute mountain to climb now.

Alex Oxlade-Chamberlain with an absolute screamer!

It’s a big moment for Oxlade-Chamberlain as well as he starts to really justify that summer move from Arsenal, where he’d struggled to impress after a combination of injuries and being used in a number of different positions.

Preferred in midfield to Georginio Wijnaldum tonight, the England international has shown what he’s all about with a powerful effort from outside the box to give Jurgen Klopp a dream start.