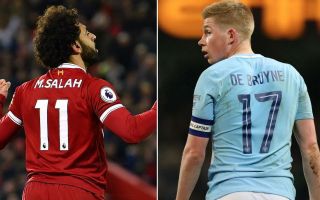 Kevin De Bruyne has revealed his selection for PFA Player of the Year, and unlike some in the Ballon d’Or vote, it appears the Belgium star hasn’t resorted to tactical voting to boost his chances of winning the award.

He has voted for his rival for the award, Mo Salah, whilst Davinson Sanchez gets his nod for Young Player of the Year, as revealed by Des Kelly on Twitter.

De Bruyne was the clear favourite to claim the PFA Player of the Year prize after a number of highly influential and outstanding performances for Premier League champions elect, Man City at the start of the season.

The Belgian has been deployed from the middle by Pep Guardiola, and along with David Silva, they have controlled possession and dominated opposition midfields.

De Bruyne has created an incredible 98 chances in the Premier League this season and has contributed to 15 league assists.

Mo Salah though, has arguably been the stand out individual this season after quite an astonishing first full-season in the Premier League.

Here are the top 5 PFA Player of the Year odds: