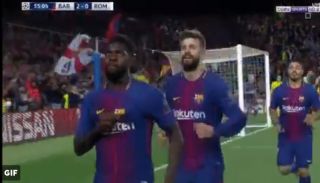 Barcelona defender Samuel Umtiti seemed to send a message to the club’s fans after scoring in tonight’s Champions League clash against Roma.

The France international has been strongly linked with a move to Manchester United recently after contract talks with Barca appear to have stalled.

Don Balon have claimed Umtiti has big demands to pen a new deal with the Catalan giants, and that he’s warned them about United offering him more money if he is to move to Old Trafford.

The 24-year-old would undoubtedly be a fine signing for any top European club after his superb form in La Liga, but it seems he wants to send the message that he’s staying. 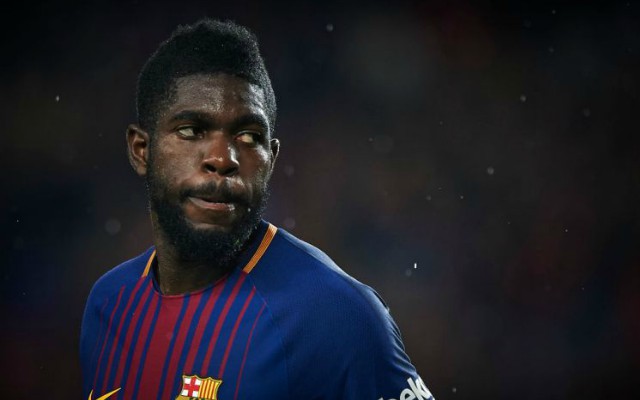 After bundling home Barcelona’s second goal against Roma tonight, Umtiti made a point of going over to the cameras to celebrate by pointing to the club badge on his shirt.

This gesture did not go unnoticed by fans on Twitter, with some Barca fans celebrating his loyalty to the club while others merely enjoyed an opportunity to troll United over potentially missing out on one of their top targets.

Umtiti claiming his first goal for Barca and holds the badge which is the first positive sign revhis contract talks. A lucky 2 goal lead

Umtiti kissing the Barcelona badge when he scored tonight. Clearly another Ramos using us for a big contract

Umtiti points at his badge as he celebrates … Seemed significant, anyway.

Umtiti kissing the badge is everything