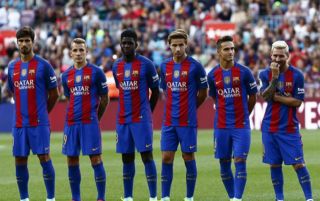 Barcelona could be set for a busy summer transfer window with speculation suggesting that there could be various comings and goings.

The Catalan giants are enjoying a solid campaign this year, as they remain on course for a treble with the La Liga title, Copa del Rey and Champions League still objectives.

In turn, it seems as though Ernesto Valverde has got a great balance in the current side and too many alterations this summer may adversely affect that moving forward.

According to Mundo Deportivo, it’s squad depth players who are the focus as it’s claimed that Andre Gomes has requested to leave the Nou Camp this summer, while Aleix Vidal could join him through the exit door.

In contrast, both Denis Suarez and Paco Alcacer are keen to stay, and given that they do offer important back-up options and competition for Valverde, he may well be wise to keep them on board unless arrivals this summer mean that they will merely fall further down the pecking order.

In the case of Gomes in particular though, it simply hasn’t worked out for the 24-year-old since his move from Valencia in 2016.

The Portuguese international has gone on to make 75 appearances for the Blaugrana, but without ever really entirely convincing that he’s the right fit for the team and establishing himself as a permanent fixture in the starting line-up.

At 24, it seems a shame that he may not have the opportunity or patience to continue to fight for his place at Barcelona, but a split does seem like the sensible option for both parties. Gomes will likely get regular football elsewhere, and Barca can reinvest his fee back into the squad.

Interestingly, the report adds that the Catalan giants have a number of quality young players coming through the ranks. So while they’ve spent big on the likes of Ousmane Dembele and Philippe Coutinho in the last two transfer windows, there could be a change in strategy coming up given the young talent at their disposal.