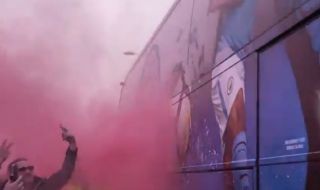 Given the way in which Man City started against Liverpool in their Champions League clash on Wednesday, it could be argued they were rattled.

Aside from the atmosphere inside Anfield as the home faithful played their part in another memorable European night, the City team bus was damaged as it made its way to the stadium earlier in the evening.

Thousands of Liverpool fans lined the streets as they let off flares and sang chants, but it turned sour too as objects were seen being thrown at the bus which resulted in the damage.

Asked after the game in an ITV interview, as seen below, as to whether it had an impact on the City players and if the subsequent apology from the Reds mattered, captain Vincent Kompany completely dismissed it as he showed a defiant front.

Whether it did or not will be up for debate, but what was clear was that the Premier League leaders didn’t show what was required to cope with Liverpool’s early onslaught and they now have it all to do in the second leg to turn it around in their favour.

The Reds will undoubtedly take a noisy travelling party with them to the Etihad next week, but it will be down to Pep Guardiola, his players and the City fans to try and pull off what would be a miraculous comeback to advance to the last four of the Champions League this season.

‘I don’t care one bit, we’re professionals.’@VincentKompany speaking about whether the attack on the @mancity coach affected the players pic.twitter.com/URJIRd8K2A