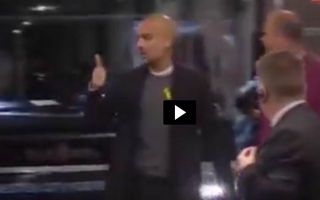 Man City boss Pep Guardiola was furious as his side arrived at Anfield on Wednesday night ahead of their loss to Liverpool in the Champions League.

The Reds claimed a 3-0 win in the first leg of their quarter-final tie to put themselves in a commanding position to advance to the last four.

Guardiola and his players will naturally still have to believe that they can overturn their deficit at the Etihad next week, but they failed to cope with Liverpool’s early onslaught in the first meeting as it followed on from the City team bus being left damaged as it made its way to the stadium.

Thousands of Liverpool fans lined the streets with flares as they sang chants, although objects were also seen hitting the bus as things took an unsavoury turn.

As seen in the clip below, and reported by Marca accompanied by the same clip, Guardiola was not in a good mood as he arrived at Anfield and made his way to the dressing room as he slammed the protection offered by the police.

“Thank you for protecting us, thank you very much. I appreciate what you have done … Shame,” he is heard saying as he makes his way past officers.

The actions of those supporters has led to a Liverpool club statement issuing an apology, while Klopp echoed that sentiment in his own interview before the game.

Guardiola’s mood wouldn’t have improved as the night went on though, as he’ll have to now mastermind what would be a stunning comeback in the second leg next week.