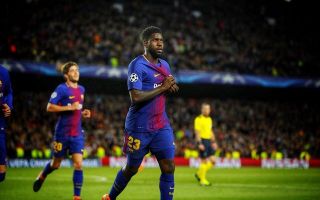 Barcelona secured a 4-1 win over Roma in the first leg of their Champions League quarter-final tie on Wednesday night, and that wasn’t the only reason that they were delighted.

The Catalan giants will be confident of their chances of advancing to the last four after taking a commanding lead in the tie, but ultimately it was Samuel Umtiti’s celebration that had them talking too.

Much has said about the Frenchman’s future at the Nou Camp, with the Manchester Evening News noting that Ernesto Valverde addressed it this week amid speculation of interest from Man Utd.

While his comments don’t equate to Umtiti signing a new contract renewal to end talk over a possible exit, it is a significant insight into the club’s thinking on the matter as they’ll be desperate for the 24-year-old to remain.

Having established a strong partnership with Gerard Pique in the heart of the defence, leading to Barcelona owning the second best defensive record in La Liga this season, they will not want to see that broken up this summer as they remain on course for a treble this year.

That’s a sentiment shared by the supporters below, as they believe that Umtiti’s celebration during the win over Roma, which saw him grab the club badge on the jersey, shows where his loyalty and future lies.

We’ve seen plenty of players kiss the badge and profess their love only to move on in the past, but Barcelona will be hoping that this isn’t one of those situations.

Based on his comments after the game, they can be confident. “It’s a celebration like any another. I wanted to say that I love this club. I haven’t got much more to add,” he said, as per Mundo Deportivo.

As seen in the tweets below, Umtiti’s popularity is obvious. Now it remains to be seen if he’ll put pen to paper and end speculation over his future.