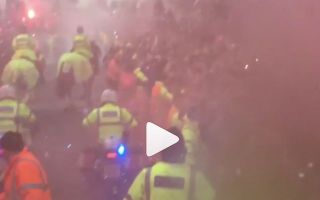 Man City’s team bus came under attack from some Liverpool fans on Wednesday evening as it made its way to Anfield for their Champions League clash.

Things went Liverpool’s way in the game itself, as an early onslaught saw them take a 3-0 lead and put themselves in a commanding position to advance to the last four of the competition.

Arguably part of the issue behind City’s early problems was the fact that they may have been left rattled after this ‘welcome’ from Liverpool fans on the way to the stadium as thousands lined the streets.

While it was an impressive spectacle for the most part, it turned unsavoury as objects were seen being thrown at the bus as a minority seemingly overstepped the mark.

Manuel Estiarte, a member of Pep Guardiola’s technical staff, posted a video from inside the team bus, as seen below, and accompanied it with captions of  “no words” and “unacceptable” as he slammed the behaviour of those fans throwing what looks to be cans at the bus.

Liverpool have since released an official club statement apologising for what occurred, what Jurgen Klopp reiterated that point in his pre-match interview on Wednesday too.

However, as far as City are concerned, they won’t have been impressed with this and they now have it all to do in the second leg at the Etihad next week to turn the tie around.