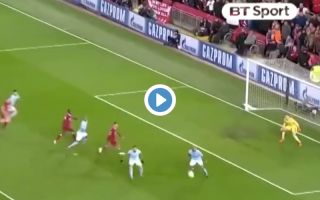 A Liverpool star has been compared to Barcelona star Lionel Messi after an audacious piece of skill vs Manchester City in the Champions League.

Liverpool star Saido Mane has been compared to Barcelona’s Lionel Messi after a piece of skill he produced against Manchester City last night in the Champions League.

Liverpool comfortably swept aside Manchester City in the first-half of their quarter-final clash with Man City. Pep Guardiola’s side were stunned by an unbelievable first-half performance from Liverpool at Anfield.

Jurgen Klopp’s side were 3-0 ahead after just 30 minutes through goals from Mohamed Salah, Alex Oxlade-Chamberlain and Saido Mane.

In the second-half the home side produced an astute defensive performance to prevent Manchester City from registering any consolation away goals with Guardiola’s side unable to produce even one attempt on target.

However, it was a moment in the first-half that did not produce goal that has got Liverpool fans talking.

Saido Mane produced an outrageous piece of skill to leave Man City defender Nicolás Otamendi on the floor in a helpless state. The moment of skill from Mane was eerily reminiscent of the skill produced by Lionel Messi in the 2015 semi-final against Bayern Munich when he sold Jerome Boateng for a hotdog in an emphatic and humiliating style.

Watch both moments below and let us know if you think Mane’s skill has anything on Messi’s magic from three years previously.

However, many fans felt the compassion between Mane and Messi is laughable…

Messi scores though you imbeciles. Get BT Sport off our screens n bring back Sky Sports for UCL matches