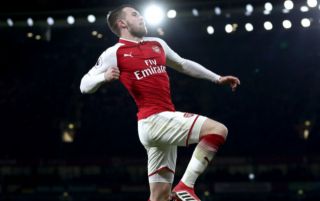 Aaron Ramsey produced a deft volley from a pinpoint Mesut Ozil cross to add to his catalogue of wonderful goals at Arsenal.

The Welshman scored twice, along with Alexandre Lacazette, to put the Gunners in a commanding position heading into the second leg next week in Russia.

Ramsey has been a polarising figure during his time at the Emirates, but this season he is replicating the form that saw him crowned Arsenal’s Player of the Year during the remarkable 2013/2014 season and Ramsey’s stats this season are proving that.

Aaron Ramsey stats: How the midfield is become more influential

Some fans have long urged him to stop trying fancy flicks and tricks and instead focus on his strengths, which is to break through the opposition lines with his dynamic and penetrative running.

Ramsey is a high risk reward player, and he often gambles running from deep in order to score crucial goals for Arsenal.

This has often left Arsenal’s defensive midfielder isolated – however – with Jack Wilshere being deployed just ahead of Ramsey, the Englishmen can drop deeper when the Welshman makes his late surges into the area.

Ramsey has always been one of Arsenal’s big game players, and he has all the attributes to score consistently like Frank Lampard used to for Chelsea.

When the assist is so good even the advertising hoardings agree…

He has scored two FA Cup final winning goals and since returning from a hamstring injury, he has contributed six goals and one assist in eight starts.

He scored hat-trick against Everton, at the AC Milan at the San Siro, and a brace last night.

Staying fit and healthy is of course Ramsey’s biggest aim, however, the club appear to be trying to manage his fitness better and not overplay him – which has previously led to soft tissue injuries occuring.

This season, he has he has scored nine goals and provided seven assists in 25 appearances, which is an impressive goal or assist every 119 minutes on average, according to Opta.

15 – Aaron Ramsey has been directly involved in 15 goals in all competitions for Arsenal this season (eight goals and seven assists); a joint-high for the Gunners alongside Mesut Özil (15). Productive. pic.twitter.com/28X9ngqGWS

Arsene Wenger attributes Ramsey’s consistency this season down to being “calmer” in front of goal and Ramsey’s stats prove this.

Ramsey is a dying breed of genuine box-to-box goalscoring midfielders; and for Arsenal, it is vital they reward him with a contract on par with Lacazette, Pierre-Emerick Aubameyang and Henrikh Mkhitaryan, otherwise they could risk losing him to Europe’s best clubs.

Manchester United have been linked with Ramsey lately and if he carries on playing like this expect other elite sides to join the queue.