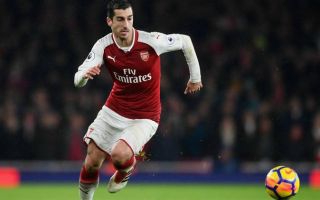 Arsene Wenger fears Henrikh Mkhitaryan could be out for a lengthy period with a medial knee ligament injury.

The Armenian has been in impressive form for the Gunners since his arrival from Old Trafford in January and he and Pierre-Emerick Aubameyang have forged a great partnership since.

The 29-year-old won the club’s player of the month prize in February and March, after scoring two goals and providing six assists in 12 appearances for the Gunners.

He and Mesut Ozil have also provided the Gunners with key assists and Mkhitaryan scored a crucial goal away to AC Milan in the Europa League last 16 tie.

However, after a clash of knees during last night’s quarter-final tie against CSKA Moscow, he stayed down for a prolonged period of time before limping off and being replaced by Alex Iwobi.

Wenger confirmed in his post match press conference that Mkhitaryan would be ruled out of Sunday’s game against Southampton.

And speaking to Sky Sports, Wenger confirmed the extent of the damage and gave a time scale too.

“He has a scan this afternoon but his medial ligament is touched so he will not be available for Sunday,” Wenger told Sky Sports.

“He will not play. For how long he will be out we will know that after the scan. But the first impression is not too positive today. I fear [it could be several weeks] and I hope I’m wrong.”