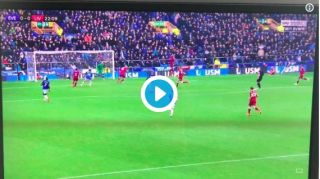 Liverpool goalkeeper Loris Karius pulled off a sensational save for his side in the Merseyside derby against Everton on Saturday.

After Yannick Bolasie had sent a curling effort towards goal from outside the box, the German shot-stopper leapt to his left and got his fingertips to it to send it wide of the post, as seen below.

It was a stunning save from Karius, who has now firmly established himself ahead of Simon Mignolet as the first choice between the posts for Liverpool.

Based on efforts like this, that’s no surprise as although the Reds had their chances at Goodison Park too, that was a crucial moment in the first half.

However, while many Liverpool fans were quick to heap praise on their goalkeeper, many pointed out the double-standards involved if it was Man Utd ace David de Gea.

The Spaniard has undoubtedly established himself as one of the top ‘keepers in Europe having consistently delivered big saves on the biggest stages for the Red Devils.

In that sense, there is still a difference between the two goalkeepers. However, in terms of quality and this stop in particular, the Liverpool fans below may have a point…

Bolasie’s effort is heading for the corner but somehow Karius makes a superb fingertip save! ??

If De Gea just made that save Karius made the world would leap praise onto him.

World class save from Karius that! But not much of a deal made from it… Imagine that was De Gea.. the commentators would have combusted by now.. ?

If that was David de Gea making that save, people would talk about it for weeks. Brilliant stop from Karius #EVELIV

If David De Gea did this sky sports would make a documentary about it but because it is Karius “the keeper who flopped” we will hear about it twice and it will be forgotten pic.twitter.com/jRpIBlxhsC

Every time Karius makes a good save, there’ll be some retarded Liverpool fan tweeting “imagine if De Gea saved that “

If David De Gea made the save that Loris Karius just made then sky sports would have started a new channel up!

If de gea made that save by karius. Everyone would be jizzing in their pants

I’m sorry but if De Gea made that save that Karius has just pulled off from Bolasie, the commentary would be going WILD about it. Fantastic save. Like properly good. #derbyday

If that was a de gea save. Everyone would be creaming their pants. Quality save by Karius.