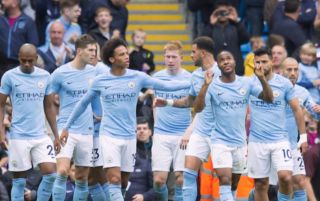 Manchester City have been the stand out team in the league this season, and they will they look to create history by winning the Premier League against their local rivals.

READ MORE: How Paul Pogba reacted to being offered to Man City by Raiola

Guardiola’s side can set a record of being crowned champions the earliest, beating United’s 2000-01 record of earliest title win by a week.

What time is Man City vs Man Utd kick-off?

Is Man City vs Man Utd on TV?

The match will be televised live on Sky Sports Premier League and Sky Sports Main Event, with coverage starting from 4.30pm.

Sergio Aguero remains a doubt for the match as he continues his recovery from a knee injury, however he faces a fitness test.

He has been out with the injury whilst on international duty with Argentina.

Benjamin Mendy is also working his way back to full fitness but the game may come too soon for him.

However, Fabian Delph could return to the starting XI.

Phil Jones, Marouane Fellaini and Marcos Rojo could all return though, giving Mourinho more options to choose from.