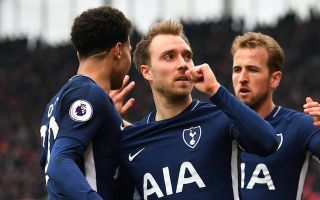 Christian Eriksen gave Tottenham a second-half lead on the 52nd minute after latching onto a perfectly weighted and positioned ball from Dele Alli.

10 – Dele Alli has provided more league assists this season than in any other campaign. Dynamic.

Christian Eriksen then went on to reinstate Tottenham’s lead with a free-kick that Stoke City failed to defend.

200 – Mauricio Pochettino is set to take charge of his 200th Premier League game (W102 D53 L44); the first non-European manager to reach the landmark in the competition. Milestone. pic.twitter.com/SFpAu00y0R

Harry Kane’s first start since his ligament injury three weeks ago proved to be a vital and clinical performance. There were initial fears that Kane’s fitness for the World Cup this summer could be compromised but Kane produced a typical performance and was initially awarded Tottenham’s second goal before it was later deemed to have been Christian Eriksen’s.

It is not looking positive for Stoke City and Paul Lambert, to say the least. Today’s loss will leave the Potters rooted in 19th position with Southampton above them holding two games in hand over Lambert’s side. It looks as though Stoke City fans may have to wave goodbye to the Premier League unless a miracle of fine form can be produced by the Potters in the business end of the season.

Hugo Lloris has often been regarded as one of the finest goalkeepers in world football but his performances of late has done little to flatter. The Spurs number one was at fault for an Alvaro Morata opener against Chelsea at Stamford Bridge and it was a poor clearance from the French international today that invited Stoke to momentarily wipe out Tottenham’s lead.

These rare Hugo Lloris errors are getting less and less rare.

Hugo Lloris is the most overrated player in the Premier League. Makes way too many errors for a “top class” goalkeeper.