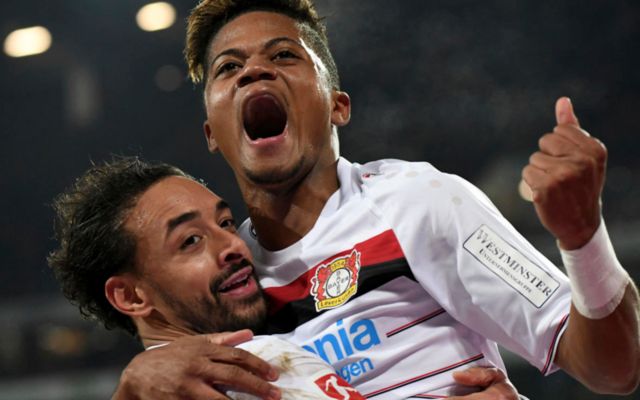 Bayer Leverkusen starlet Leon Bailey has been attracting plenty of interest this season, with Man Utd and Chelsea said to be monitoring him.

The 20-year-old joined the Bundesliga outfit in 2016, but had a slow start to life in Germany last season as he made just 10 appearances in all competitions.

SEE MORE: How Paul Pogba reacted to being offered to Man City by Raiola

However, it’s been a different story this season, as the Jamaica U23 international has bagged 11 goals and provided five assists in 27 outings to emerge as one of the more exciting prospects in European football.

As noted by Goal.com though, the youngster has now been advised by teammate Sven Bender to ignore speculation and the enticement of moving to the Premier League with both United and Chelsea specifically mentioned as potential destinations.

“He has got special abilities, he is incredibly fast and great at dribbling. But we did not expect that he would explode that fast.

“He is only 20 years old and therefore still has development potential. He is a great player and will probably leave one day for a high fee, but I wish him to stay with us for a long time.”

In his defence, Bender makes a great point. At just 20 years of age, Bailey has a better chance of playing regularly and therefore gaining experience and developing his game with Leverkusen.

Moving to Chelsea or United would add to increased scrutiny, competition for places and a need to adapt to an entirely new league, country and teammates, and so it could be too early for such a young player to make that kind of move.

Should he continue to impress in the coming years, it’s highly unlikely that this could be Bailey’s only opportunity to get a big move to England, However, if he and his agent feel that it’s the right decision for his career path and either Man Utd or Chelsea can reach an agreement with Leverkusen, Bender could be bidding farewell to his teammate sooner rather than later.