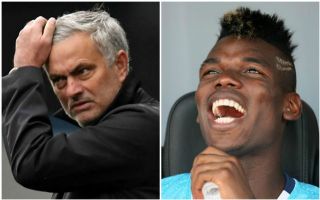 Man City boss Pep Guardiola got the media talking on Friday after claiming that Man Utd midfielder Paul Pogba was offered to them.

As seen in the video below, the Spanish tactician told reporters that agent Mino Raiola had offered both Pogba and Henrikh Mkhitaryan to him in January.

Obviously, neither transfer materialised, with Mkhitaryan joining Arsenal while Guardiola added that City simply couldn’t afford Pogba so it was never an option.

While the French international has had his troubles at Old Trafford this season with form and speculation over his future, it seems quite a drastic move to then be shopped to their direct rivals which would undoubtedly be a widely unpopular transfer.

Based on his Twitter post on Friday, it seems the suggestion also took Pogba by surprise, as many perceived this tweet as a response to the claim that he was offered to City.

Now, to clear up the matter appropriately, ESPN have reported that United sources have told them that Pogba was neither available in January nor would he be allowed to move across Manchester to join their bitter rivals.

That in turn raises doubts over either Raiola or Guardiola’s recollection of events, as seemingly someone isn’t telling an accurate story, or perhaps it’s gone on behind United’s back.

With City facing United at the Etihad Stadium on Saturday evening with a chance to secure the Premier League title, it could even be argued that it’s mind-games from Guardiola to disrupt them. It would be a clever tactic but what is clear based on this latest report, is that Pogba isn’t crossing the city divide any time soon.