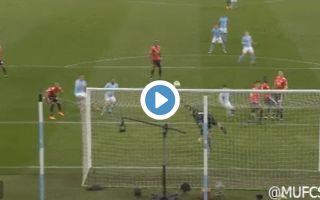 Pep Guardiola and Manchester City produced a first-half masterclass and looked to have the Premier League title within touching distance.

Vincent Kompany and Ilkay Gundogan both scored for City in the first 45 minutes after the blue half of Manchester carved out an enormous nine chances.

However, United came out of the tunnel in the second-half as an inspired team.

Paul Pogba lead the iconic comeback from the Red Devils with the French international scoring twice in the space of just two minutes.

Chris Smalling who produced a poor first-half performance to say the least then converted a winner for United after converting an Alexis Sanchez cross past City goalkeeper Ederson.

Manchester City then pressed to find an equaliser with Pep Guardiola introducing both Kevin De Bruyne and Sergio Aguero to the fold after both had been left on the bench.

With just minutes remaining Man City were presented with the goalscoring opportunity that they had been craving.

Sergio Aguero latched onto a Leroy Sane cross with minutes remaining and looked to have converted an equaliser.

However, David De Gea produced a save that optimised Manchester United’s second-half performance. Watch the moment below.