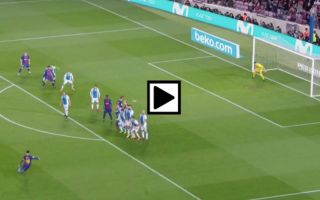 Lionel Messi scored another absolutely stunning free kick against Leganes, as the Argentine superstar put the Blaugrana 1-0 up against the Spanish minnows in La Liga.

With the game heading into the 26th minute, Messi stepped up to a 25-yard free-kick and powered it home to give the home side the lead in La Liga.

The goal gave the Blaugrana the lead, with it now meaning that Ernesto Valverde’s side are a step closer to securing the record of longest unbeaten streak in La Liga, which stands at 38.

Should Messi’s strike help his side on their way to victory, it’ll see Valverde’s side equal the record set by Real Sociedad in 1980, with Valencia being the team to try and put an end to the Catalan giants’ ridiculous run when they take on each other next week.

Here’s a clip of Messi’s super strike this evening. He is just unstoppable at times, isn’t he?