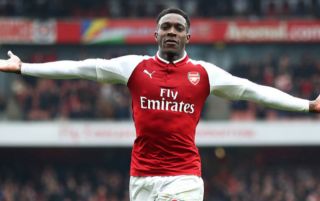 Arsenal beat Southampton 3-2 at the Emirates today, with Danny Welbeck picking up the Man of the Match award following a fantastic display from the England international.

Southampton took the lead thanks to a goal from Shane Long, with Pierre-Emerick Aubameyang and Welbeck then bagging to put the Gunners 2-1 up.

Charlie Austin then equalised with around 15 minutes to go, however Welbeck then popped up again to nab a winner nine minutes from time to secure all three points for the north London side.

Here is the Good, the Bad and the Shocking from Arsenal’s narrow win over the Saints on Sunday afternoon.

Danny Welbeck was absolutely sublime today, with the former Man United forward bagging both an assist and two goals to effectively drag the Gunners over the line to victory over Mark Hughes’ side.

The England star hasn’t been in the best of form so far this campaign, with the player only managing to bag seven goals before this afternoon’s game, however today showed that the 27-year-old definitely still has the ability to effect games.

Despite missing a few easy chances, Welbeck was still able to bag the all important goals that allowed Arsenal to secure victory over the relegation-threatened Southampton.

This fan certainly agree with us!

Danny Welbeck doesn't do tap ins. Too mainstream for him.

He'll mutilate your emotions before hitting the marks.

It’s clear to see that Arsenal are still having troubles at the back, as the Gunners conceded two goals to a Southampton side who have seriously struggled in front of goal this season.

The Gunners conceded two preventable attempts this afternoon, as they gave themselves all the work to do to ensure that they walked away from the match with all three points.

Arsenal definitely haven’t been themselves of old this season, with Arsene Wenger’s side having lost 10 of their 32 league this campaign, despite having scored the fifth most amount of goals in the division.

From this, it’s clear to see that the north London side don’t need to invest in attacks in the summer, but defenders, something that has been apparent for the last few years.

This Gunner certainly seems to be on the same wavelength as us!

Lets just talk about Danny Welbeck’s miss for a second. How on earth has a player who has already bagged a goal and an assist in the match so far able to produce a shocker as bad as that?

Not only would have he put the game out of sight for the home side, but it would’ve also given him his first ever Premier League hat-trick, a feat only a number of players can say they have achieved.

This supporter definitely seems to be agreeing with us about Welbeck’s shocking miss!

MISS OF THE SEASON! Danny Welbeck, you simply must score that. Open goal, two-yards out. #AFC #SaintsFC