Man Utd’s Spanish Twitter account got people talking on Saturday as they randomly posted James Rodriguez’s name prior to the Manchester derby.

Before the Red Devils were busy launching a stunning comeback at the Etihad, their Spanish Twitter admin got themselves in a mix up it seems and accidentally posted the Colombian international’s name, as seen in the image below.

Naturally, it was quickly deleted, but in this day and age on social media, it wasn’t quick enough to avoid some from screen-shotting it, as noted by The Mirror.

On the face of it, it seems like an innocent mistake as it doesn’t appear to many any sense, with James Rodriguez busy helping Bayern Munich win their sixth consecutive Bundesliga title this weekend.

As per ESPN, the 26-year-old has previously been linked with a move to Old Trafford and so this will be ammunition for the transfer gossip fans to run with it and suggest that it could be a hint at something in the future.

However, given the timing of the tweet and its randomness, it doesn’t appear to be anything untoward at this stage other than a mere mistake from whoever posted it as they tried to quickly get rid of the evidence.

Fortunately, there were no such distractions for the players as they came roaring back from being 2-0 down at half-time to win 3-2 at the Etihad and prevent Man City from securing the title against them. 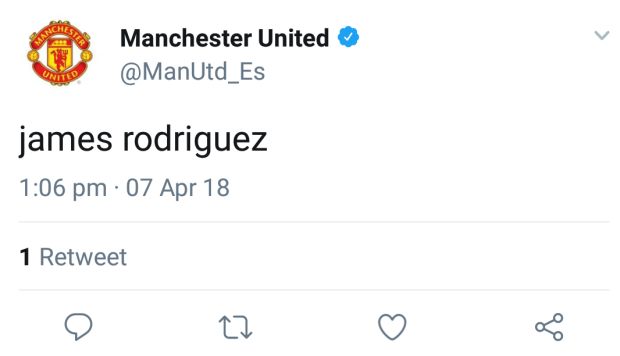