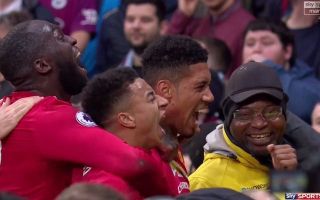 Man Utd secured a stunning comeback against Man City at the Etihad on Saturday, and some eagle-eyed fans have spotted something fishy about the celebrations.

After Paul Pogba’s quick-fire double in the early stages of the second half after City had taken a commanding lead in the opening 45 minutes through Vincent Kompany and Ilkay Gundogan, Chris Smalling added a third for the visitors.

As he went across to celebrate with the travelling fans and his teammates, the cameras cut to a side angle which showed a steward next to the players.

We’re assuming that his job was to get in between the supporters and players to ensure that safety is maintained, or at the very least keep an eye on the crowd for anything untoward.

Instead, as seen in the video below, and much to the delight of many Man Utd fans, he looked like he was thoroughly enjoying Smalling and Co. celebrating, leading to many suggesting that he’s probably a United fan.

It would be very harsh of City to look into the matter, but he’s hardly done his job prospects much good!

Even the City steward is a red?? pic.twitter.com/KOvcoxtCTf

The Manchester City steward is a red. He’s loving it. ? #mufc pic.twitter.com/nD2xhAprCH