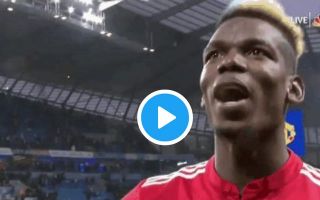 Paul Pogba led an incredible Man Utd comeback against Man City at the Etihad on Saturday, and he had a message for the fans after the full-time whistle.

The French international scored twice in the early stages of a thrilling second half to draw his side level, before Chris Smalling added a third to complete the turnaround.

City were dominant in the first half and had plenty of chances to kill the game, but to their credit, United maintained belief and produced an impressive second-half performance.

Pogba was key in that, while David de Gea proved his class too with a stunning save to deny Sergio Aguero an equaliser.

However, the majority of the talk before, during and after the enthralling encounter centred around Pogba, and as seen in the video below, many have perceived his message to the United supporters as being not to listen to the speculation over his future as he went on to thump the badge on his chest while walking off.

That would seemingly be a major indication that any talk of an exit from Old Trafford is simply not true, as it comes after City boss Pep Guardiola had claimed earlier this week that the 25-year-old’s agent, Mino Raiola, had offered them his services in January, as noted by BBC Sport.

Based on this reaction, it’s fair to say that probably isn’t true…

Pogba telling the United fans to not listen to the talk… I love this man pic.twitter.com/I8VYWLkBhz

Look what it means to every single player. ??
Look at De Gea showing the Man Utd badge to City fans!
Look at Marcos Rojo celebrating and pushing the steward away!
Look at Matic, Valencia and everyone else!

And finally, look at Pogba at the end. ??pic.twitter.com/itXpZlBxeB