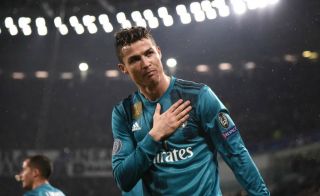 The Champions League quarter-finals concludes this week and four teams will advance into the semi-final draw.

Manchester City will be looking to replicate Barcelona’s stunning comeback against PSG last season and overturn a deficit against Liverpool.

The Cityzens trail the Reds by three goals and last week’s game was a memorable one for Jurgen Klopp’s team, as they produced a blistering first half performance.

Liverpool will be hoping to have Salah back for the game after his goal and assist helped to inspire them to victory.

However, Liverpool’s odds of winning the competition are slim compared to the likes of European giants, Real Madrid, Barcelona and Bayern Munich.

Real Madrid’s love affair with the competition continues and they are on course to make yet another semi-final appearance.

La Liga rivals Barcelona, are also in pole position to join them, after they defeated Roma 4-1 at the Nou Camp.

Surprisingly, Barcelona have only made the semi finals of the Champions League in one of the last five seasons.

As for German giants, Bayern Munich, they take two away goals back to the Allianz Arena against Sevilla in the second leg.