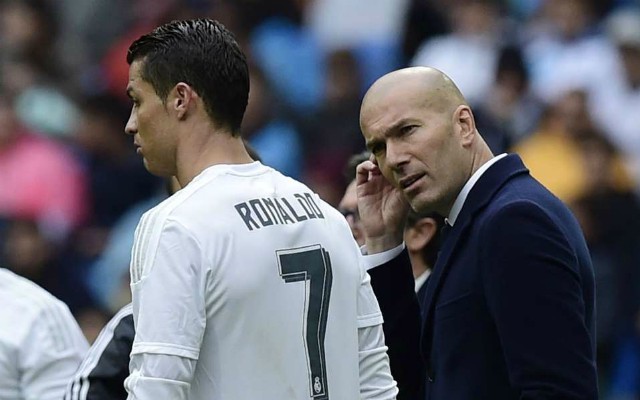 Real Madrid were held to a 1-1 draw by Atletico Madrid in the derby on Sunday, and reports claim Cristiano Ronaldo was far from impressed with one key decision.

The Portuguese superstar was on the mark again as he scored with a delightful volley to open the scoring, taking his own personal tally for the season to 40 goals in 37 appearances in all competitions.

However, Antoine Griezmann struck back minutes later to earn a share of the spoils, with Los Blancos remaining in third place and still having to focus on the Champions League to avoid being left empty-handed this season.

According to Don Balon, as re-reported by The Express though, Ronaldo was left furious with a decision from Zinedine Zidane. It’s claimed that he didn’t agree with the choice to bring Isco on from the bench, as the 33-year-old believes the Spaniard is more effective as a starter and Marco Asensio can make more of an impact as a substitute.

Naturally, as ever with such reported insight into the dressing room, it’s always debatable as to how accurate it is, but it’s difficult to actually disagree with Ronaldo’s reported assessment.

Given Isco’s characteristics, he has the ability to dictate the tempo of a game and help dominate possession as a starter, but he’s more inclined to struggle to get up to the pace of the game off the bench and have a positive influence.

In contrast, Marco Asensio has proven over the course of the season that he can make an impact as a substitute, albeit he’ll undoubtedly be desperate to be a regular starter.

The 22-year-old has 10 goals and four assists in 43 appearances this season, and so starting Isco and bringing him on rather than the opposite way round could arguably have been the right call this past weekend. As per the report, Ronaldo certainly seemed to think so and was far from impressed.