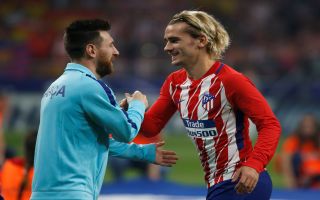 Speculation continues to link Atletico Madrid star Antoine Griezmann with a move to Barcelona this summer, and he has responded to a fresh report.

After a slow start to the campaign, the 27-year-old has rediscovered his best form to lead Atleti charge for success with 25 goals and 13 assists in 40 appearances.

With the La Liga title slipping away, he’ll hope to guide them to a second place finish above Real Madrid in the coming weeks, while the Spanish giants also have the Europa League to play for.

In turn, his focus will be on matters on the pitch, particularly with the World Cup also approaching this summer.

However, as reported by ESPN, he has responded to speculation over his future amid a new report that Barcelona are preparing to pay his €100m release clause this summer, as per the report.

“It’s not good information,” he is quoted as saying. Football365 add that he noted:  “I don’t know where that information comes from. But I don’t know anything about it, so for now there is nothing.

“[These reports] are false.”

As noted by Marca, Griezmann’s release clause will see his fee drop back down to €100m this summer, and so it remains to be seen if Barcelona are willing to splash out and add another world-class attacking talent to their squad.

With Lionel Messi, Luis Suarez, Philippe Coutinho, Ousmane Dembele and Andres Iniesta all offering Ernesto Valverde plenty of quality and competition already in that department, it’s debatable as to whether there is space for the Frenchman too without selling someone.

In turn, it remains to be seen if a move to the Nou Camp materialises, but based on his comments above, he’s either keen to avoid transfer talk becoming a distraction at a key point in the campaign or perhaps he is genuinely unaware of Barca pushing forward with their reported plans to sign him.