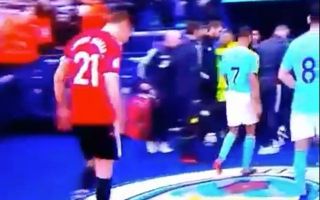 Man Utd midfielder Ander Herrera has responded to allegations that he spat on the Man City crest at the Etihad during Saturday’s Manchester derby.

The 28-year-old was seen making his way off the pitch at half-time, with the video below showing him spit on the crest on the ground on his way towards the tunnel.

As noted by The Guardian earlier in the day, the Spaniard released a response via a club spokesperson to dismiss any suggestion that it was intentional.

It came as the Red Devils were trailing 2-0 at the Etihad heading into the interval, before they mounted an incredible comeback to secure a 3-2 win and deny their rivals the chance of celebrating winning the Premier League title against them.

Their mood coming off the pitch after 45 minutes has arguably played a factor in some suggesting that Herrera deliberately spat on the City club crest, but evidently he is adamant that it wasn’t his intention at all.

As seen in his Instagram story post below, Herrera has now hit out at suggestions that he would spit on another’s club badge on purpose and is seemingly keen to put the matter behind him.