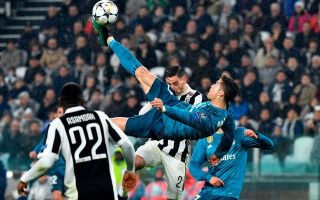 It was a good day at the office for Arsenal on Sunday, as they managed to secure a 3-2 win over Southampton to keep their momentum going.

The priority for the Gunners at this stage will surely be the Europa League, as it remains their most realistic chance of getting back to the Champions League next season.

However, Arsene Wenger will be buoyed by their improved form domestically too while it’s six consecutive wins in all competitions, and that will surely only be building confidence within the group to go on and enjoy a good finish to the campaign.

It seems as though Calum Chambers is a bit too confident right now though, as he opted to try and recreate Cristiano Ronaldo’s sensational goal against Juventus in the Champions League last week.

Unfortunately for the Arsenal defender, he didn’t quite manage to get the same connection on his shot and his tame effort was comfortably dealt with.

Nevertheless, he deserves credit for poking fun at himself, as seen with his tweet below, as he clearly saw the funny side of it.

Fair play for trying it Calum, but probably best to leave it to Cristiano in future…