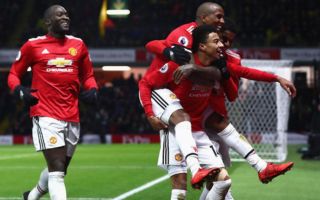 Man Utd produced a sensational comeback in the second half of the Manchester Derby against Man City on Saturday to secure a 3-2 win at the Etihad.

It was all to play for at the weekend, as City knew that a win over their bitter rivals would allow them to celebrate winning the Premier League title.

All was going to plan at half-time with the hosts 2-0 up, although they should have been out of sight given the chances that Raheem Sterling missed.

They were ultimately made to pay for that, as United came roaring back to seal a 3-2 win after running riot in the early stages of the second half.

It was an incredible contrast to see in terms of their performance either side of the interval, and now The Times have reported that Ashley Young was one of the senior players to stand up in the dressing room and deliver a rousing speech to inspire their comeback.

“The City fans are shouting ‘Olé’ and they’re embarrassing us. Are we going to stand for that?” the report claims Young said. “Remember your responsibilities to the fans and the badge. Show some pride and fight for each other.”

It’s added that both Jose Mourinho and Michael Carrick also addressed the rest of the group as United showed great character and determination to fight back and give the travelling supporters a day to remember.

Paul Pogba’s brace and Chris Smalling’s effort turned the game on its head, and the Red Devils will surely be hoping to use the win as a springboard to end the season well and prepare to bridge the gap to their rivals at the top of the Premier League table next season.