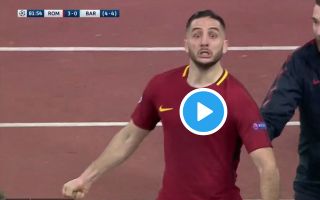 Roma booked their place in the semi-finals of the Champions League with a stunning 3-0 win over Barcelona at the Stadio Olimpico on Tuesday night.

Trailing 4-1 from the first leg and with it all to do, the Serie A giants weren’t fancied by many to advance at the expense of Ernesto Valverde’s men given their deficit.

However, after scoring a crucial away goal at the Nou Camp, Edin Dzeko took just six minutes to find the back of the net in Rome to give the home side real belief that a turnaround was on the cards.

Daniele De Rossi scored a penalty just before the hour mark, but the miracle comeback was completed by Kostas Manolas in the 82nd minute as a poor Barcelona had no response to rescue themselves.

In a thrilling tie that saw Roma become only the third side in Champions League history to overturn a three-goal deficit in a knockout game, the Italians will be delighted to have advanced while it leaves Valverde and his players with big questions to answer.

The Catalan giants still have the La Liga title and Copa del Rey to fight for this season, but few would have predicted that they wouldn’t be in the semi-final draw of the Champions League on Friday.

Manolas had other ideas, and judging from his celebration, he was absolutely delighted…

Manolas heads home Roma’s third, and as it stands…

Barca are going out! ? pic.twitter.com/3CXUZBYGNn