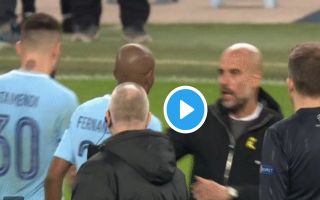 Man City boss Pep Guardiola was sent to the stands at half-time by referee Antonio Mateu Lahoz after this furious outburst as the players made their way to the tunnel.

The hosts led Liverpool 1-0 at the break in the second leg of their Champions League quarter-final clash at the Etihad, with Gabriel Jesus scoring early to give them hope of overturning a 3-0 deficit.

However, they saw a goal from Leroy Sane ruled out for offside shortly before the break, although replays showed that the German international wasn’t in an offside position and the ball in fact came off James Milner.

As noted by ESPN’s Man City correspondent Jonathan Smith in his tweet below, and seen in the clips below, the Spanish tactician was far from impressed with the official’s performance in the first half and let him know about it.

Guardiola sent off at half time. Incensed with the referee after their ridiculous decision.

Aside from the controversial offside call, the referee dished out plenty of yellow cards in the opening 45 minutes too, and unfortunately for City, Guardiola wasn’t able to keep his composure at the break and was duly sent to the stands for the second half.

It will have been far from ideal for them not to have him on the sidelines to direct them as they chase the game, and he undoubtedly cut a frustrated figure in the stands as shown by BT Sport cameras early in the second period.

Pep Guardiola has been sent to the stands for the second half after clashing (again) with referee Antonio Mateu Lahoz… pic.twitter.com/3ywfaQOP7x