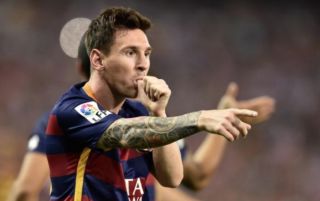 Lionel Messi is regarded as one of the greatest ever players to lace a pair of football boots and he boasts numerous accolades for both himself and his club.

Today is the Champions League quarter-final second leg and Messi’s club, Barcelona, are in prime position to make another semi-final appearance after they defeated Roma 4-1 at the Nou Camp last week.

What have you ever wondered what Lionel Messi’s net worth is? We look at the details here.

Messi made his professional debut in 2004 at just 17 years old.

He also holds the title of FC Barcelona’s top scorer of all time.

At the weekend, Messi scored his 29th career La Liga hattrick for the Catalan giants.

According to Celebrity Net Worth, Lionel Messi’s net worth is approximately $340 million (£242.9 million).

According to Forbes annual 2017 list, Lionel Messi is currently the second-highest paid soccer player in the world, with an estimated $80 million (£57.1 million) in earnings and bonuses combined.

He has also invested in property in his native home in Rosario, Argentina, where he has put money into the Azahares del Parana project.