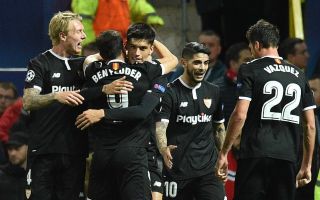 The Bundesliga champions take a slender lead into the game, but importantly they have two crucial goals.

They won 2-1 in the first leg in Spain last week with Jesus Navas scoring an own goal before Thiago Alcantara scored a deflected second.

Sevilla’s morale will be low following a 4-0 loss against Celta Vigo in La Liga over the weekend; and they have yet to win in four games.

Bayern secured yet another Bundesliga title at the weekend – a record sixth in a row.

James Rodriguez, Arjen Robben, Thomas Muller, Franck Ribery, and Robert Lewandowski all start on the pitch at the same time for the Bundesliga champions.

It’s a familiar lineup for Sevilla, with Ever Banega returning and Angel Correa playing too.