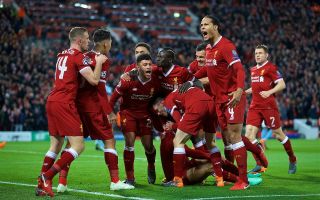 The Reds won 5-1 on aggregate to progress to the semi-finals of Europe’s top club competition, and have certainly proven a major bogey team for City this season.

MORE: What Jurgen Klopp said to Liverpool players at half-time against Man City

These two victories in Europe followed a 4-3 win over Guardiola’s side at Anfield in the Premier League, meaning Liverpool have actually beaten the runaway league leaders three times this season.

Remarkably, that’s never actually happened to Guardiola before in a career where things have mostly gone his way at super-clubs like Barcelona, Bayern Munich, and now City.

3 – Liverpool are the first team to beat a side managed by Pep Guardiola three times in a single season. Scourge. pic.twitter.com/dXAxvMQAr2

The Premier League title should still be a formality despite defeat to Manchester United at the weekend, but it is a bit of a worry that at one of the most important stages of the season City have now lost three in a row.

That in itself is a rarity for Guardiola, whose worst run in his career is four losses on the spin, and one of those was a penalty shoot-out.