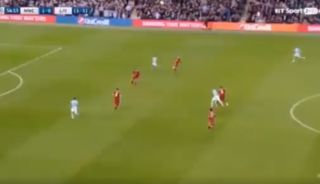 Roberto Firmino scored Liverpool’s winner last night and is really coming into his own in that centre-forward position this season despite initial doubts.

The Brazilian has added a more clinical touch to his game after starting out largely as a winger or number ten earlier in his career, but that’s arguably just aided him in adjusting to playing up front under Jurgen Klopp.

See below as the tireless Firmino chases City playmaker Kevin De Bruyne right the way back to pretty much just outside his penalty area to help out his team-mates in midfield and defence.

Would Higuain, Lewandowski, Cavani or Aguero have made this defensive sprint? pic.twitter.com/n3amF8BmFJ

There are few strikers in world football who’d put in the hard yards like this all over the pitch, and it makes Firmino one of the most complete attacking players in Europe right now.

Much has been made of the goalscoring brilliance of Mohamed Salah this season, but Liverpool would not be the same side without the tremendous work rate of Firmino up front.

Jurgen Klopp’s tactics working hangs on players giving it their all and there are few who do it better than this guy.