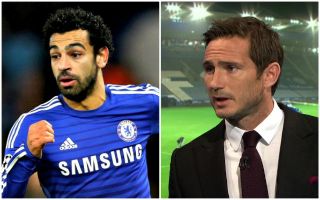 Chelsea legend Frank Lampard has offered some insight into why Mohamed Salah flopped during his time with the Blues despite exploding into the form of his career with Liverpool.

The Egyptian forward joined the Reds from Roma last summer and has scored a remarkable 39 goals in his debut season at Anfield, putting himself in serious contention to win both the Golden Boot and PFA Player of the Year.

MORE: Liverpool did something no team has done before vs Manchester City

Salah, however, barely got a look-in during a brief stint with Chelsea earlier in his career, despite arriving at the time as a decent prospect following some eye-catching displays for Swiss side FC Basel.

Now certainly up there with the best attacking players in world football, it’s bizarre to think Chelsea failed to spot any of this potential, and Lampard says that’s partly down to how he’s changed his style of play this season.

The former England international has compared the 25-year-old’s playing style with Barcelona superstar Lionel Messi for the way he drifts off the wing, something he didn’t do at Stamford Bridge.

Steven Gerrard: “That dink…” ?@rioferdy5: “He looks like a guy who all he wants to do is finish games.”

Frank Lampard: “All of a sudden the ball comes to him and he goes.”

The boys in the studio can’t get enough of Mo Salah ??? pic.twitter.com/eX3QKK1kbs

Lampard also concedes he had some great players in front of him at Chelsea and was perhaps a little unlucky with the quality he was up against at that time.

‘At Chelsea he was seen as a winger,’ Lampard told BT Sport. ‘He didn’t have much impact but there were a lot of players ahead of him, the likes of Eden Hazard who was older than him.

‘By releasing himself from the wing he’s been able to show his brilliant intelligence. Even for the goal. Sometimes we watch Lionel Messi and he’s great at just standing in areas.

‘Salah’s started to do that, just standing in areas and all of a sudden the ball comes to him and he goes.’