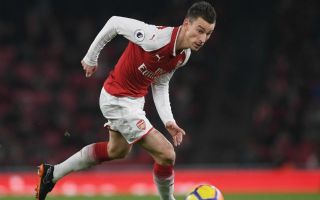 Arsenal defender Laurent Koscielny admits the way the team played against CSKA Moscow tonight was not how Arsene Wenger set them up to play for their Europa League quarter-final second leg.

The Gunners started poorly in Russia as they went 2-0 down but managed to come back and snatch a 2-2 draw, going through 6-3 on aggregate.

MORE: Arsenal fans love what Mohamed Elneny did as he set up Danny Welbeck’s crucial goal vs CSKA Moscow

However, it took them a while to get going as they seemed to sit back and invite pressure onto them from the home side, though Koscielny insists this was not because Wenger set them up to be cautious.

‘It was not the plan (to defend deep). I think we missed a lot of movement to be available for our teammates. We didn’t win the duels,’ Koscielny told BT Sport.

The France international added that he’s happy Arsenal were able to seal their passage through to the semi-finals of the Europa League and give themselves genuine hope of qualifying for next season’s Champions League.

Winning the Europa League is of huge importance to the north London giants now that making it into the top four looks highly unlikely given their poor form in the Premier League.

‘It’s a big competition for us because it’s our last chance to qualify for the Champions League and we will keep going until the end,’ he added.