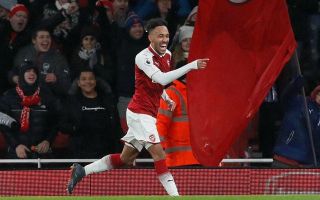 The Gunners travel to CSKA Moscow in a bid to progress into the Europa League semi-final draw and winning the competition would guarantee entry to next season’s Champions League group stages.

Arsenal failed to qualify for the Champions League for the first time during Wenger’s 22-year tenure at the club last season and their poor away record this season has seen them trail the top four by 13 points.

Pressure has mounted again on manager Arsene Wenger this season, and there have been calls from growing sections of fans for a change at the club in order to challenge for the Premier League.

There have been noticeable empty seats at the Emirates too, however, £56 million signing Aubameyang, backed his manager during these toxic times.

When asked whether Wenger deserves the criticism he receives, he told Sky Sports News: “It’s a difficult question. Sometimes I think it’s a bit unfair.

“We’re playing better in these last games and I hope the people can see this.”

Aubameyang is ineligible for tonight’s game against CSKA, however, the Gabion has sparkled for the Gunners, contributing to seven goals and one assist so far.