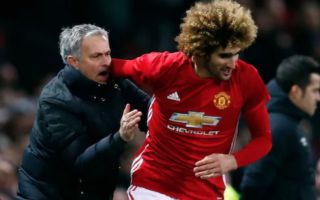 With his contract set to expire this summer and with no renewal seemingly in sight, Marouane Fellaini has been linked with an exit from Man Utd.

The 30-year-old has been with the Red Devils since 2013, making over 150 appearances for the club and winning an FA Cup and Europa League trophy during his spell at Old Trafford.

However, as we edge ever closer to the summer, the Belgian international faces the prospect of becoming a free agent as his contract will expire.

According to Calciomercato, Juventus have snubbed the opportunity to snap the stalwart up ahead of next season, while The Daily Mail add a crucial update on a potential shock move to join Liverpool.

It’s claimed that a switch to Man Utd’s bitter rivals is ‘unlikely’, and that seems like a sensible decision as Fellaini wouldn’t be a popular man in the red half of Manchester if he did choose to join the Reds.

From a Liverpool perspective, it’s understandable why there is a link as Jurgen Klopp faces his own free transfer headache this summer with Emre Can seeing his contract run down.

As per the club’s official website, they have already secured the signing of Naby Keita from RB Leipzig this summer, but they’ll need additional depth to compete on various fronts and so merely replacing an outgoing star with another may not be enough.

Although he has done an important job for Jose Mourinho over the last two seasons, it remains questionable though as to whether Fellaini is the best option to fill a possible void, as injuries and the fact that he’s entering the latter stages of his career may count against him.

Fortunately though for any Liverpool fans hoping he wasn’t going to be regarded as some sort of solution, it doesn’t sound as though he’ll be heading for Anfield this summer.