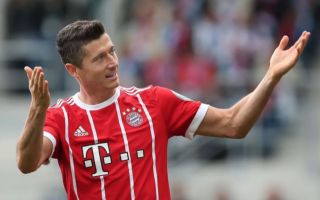 Robert Lewandowski’s future could be away from Bayern Munich with Chelsea being one of four clubs to be interested in the Polish striker, according to reports.

The Poland international’s future has been subjected to conjecture recently, with the Blues as well as a host of other top European clubs, wanting his signature.

The latest is that Lewandowski has instructed his new agent, Pini Zahavi, to facilitate a switch to one of four clubs, with Chelsea, PSG and Real Madrid among those, according to L’Equipe.

Though he is 29, Lewandowski has been one of the most prolific goalscorers in Europe in recent times and this season he has netted 26 Bundesliga goals and five times in the Champions League.

However, with Bayern securing a record sixth consecutive Bundesliga title – the Polish star is reportedly looking for a new challenge away from Germany.

Should he move to Chelsea, he could potentially displace Alvaro Morata up front, after the Spaniard has struggled for consistency this season.

But he is contracted until 2021, so Bayern could command a hefty transfer fee.